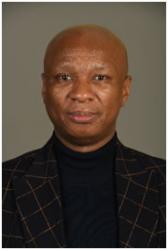 Current:
Zizi Kodwa is the Deputy Minister of State Security of the Republic of South Africa from 30 May 2019.
Past:
Political Career:

Past:
He served as the spokesperson of the African National Congress since 26 May 2014 until 2017.. He participated in Student Representative Councils and in more militant organisations such as the Congress of South African Students, which was banned and later reincarnated as the Township Student Congress. At university he became a member of the South African Students Congress and also served as an SRC President. As a member of the ANC Youth League, Mr Kodwa worked in different capacities in the league's Western Cape branch and was later elected on to the organisation's national executive committee. He was a member of the ANC Youth League until its national congress in Mangaung

He holds a Bachelor of Arts Honours degree in development studies from the University of the Western Cape.

Personal Interests/Awards/Membership:
He serves on the Board of Trustees of the South African International Marketing Council.