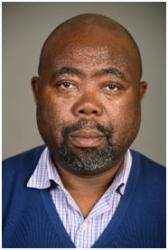 Past:
During the apartheid years he became involved in politics from a young age and was expelled from school several times for involvement in political activities. Mr Nxesi was a teacher at Ikusasa Senior Secondary School from 1985 to 1990, during which time he was also the head of the social sciences department. Mr Nxesi has also served as president of Education International and secretary of the National Education Union of South Africa. He has also served as Assistant Secretary-General and Secretary-General of the South African Democratic Teacher's