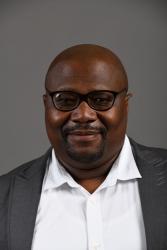 Personal Interests/Awards/Membership:
Received an award in 2007 from the Dirang Mmogo Business Enterprise in honour of his altruism ardour and support for youth development; Received an award in 2007 from the South African Football Association in recognition of his visionary leadership in sport; and Received a Gift of Giving Award in 2009 on behalf of the City of Matlosana from the Nelson Mandela Foundation and the Vodacom Foundation. Received a Premier Youth Award in 1997 from the North West Premier for his contribution in youth development and empowerment.