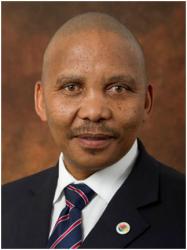 Current:
Mr Holomisa is the Deputy Minister of Justice and Correctional Services of the Republic of South Africa with effect from 30 May 2019.
Past:
He was the Deputy Minister of Labour of the Republic of South Africa with effect from 26 May 2014 to 25 May 2019. Mr Holomisa was previously a Chairperson and a member of Parliamentary Committees of Agriculture andLand Affairs, Constitutional Review, Justice& Constitutional Development, Provincial and Local Government. He served as the Hegebe Cultural Development Trust Board Chairperson. He is the former UWP Consulting Board Chairman; Contralesa Development Trust Board Chairperson; Contralesa Investment Holdings Board Chairperson; Former Member of the Green Trust Board of Trustees; Former Nelson Mandela National Museum Council Member; Misty Seas Investments Board Chairperson; Former member of SADC Parliamentary Forum. Mr Holomisa was previously a member of the University of Transkei (UNITRA, now known as the Walter Sisulu University), Magistrate Commission and various other public bodies. He is a Public speaker and prolific writer on cultural, developmental, economic, governance and political issues. He served as the President of the Congress of Traditional Leaders of South Africa (Contralesa) from 1990 until 2013.

Personal Interests/Awards/Membership:
He has been a Member of Parliament since 1994. He is the Chairman of the Southern African Development Community Council of Traditional Leaders (SADC-CTL) since 2002.