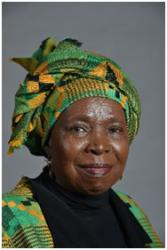 Current:
Minister Cooperative Governance and Traditional Affairs from 30 May 2019
Past:
Minister in The Presidency: Planning, Monitoring and Evaluation

Past:
Dr Dlamini Zuma served as a Research Technician to Professor Adams, Medical School, University of Natal, Durban in 1972; she also served as Vice-President of the South African Student's Organisation (SASO) in 1976 and worked as House Officer, Surgery at Frenchay Hospital, Bristol, England between 1978 and 1979; and House Officer with Canadian Red Cross Memorial Hospital in Berkshire, England between 1979 and 1980. She was Chairperson of ANC Youth Section in Great Britain between 1977 and 1978; Vice Chairperson of the Regional Political Committee of the ANC in Great Britain from 1978 to 1988 and Chairperson of Regional Political Committee of the ANC, Great Britain between 1988 and 1989. Dr Dlamini Zuma worked as Medical Officer in Paediatrics at Mbabane Government Hospital in Swaziland from 1980 to 1985; Paediatric attachment at Wittington Hospital in England from 1987 to 1989. She was a founder and Director of Health Refugee Trust (HEART), Health and Development Organisation in England from 1988 to 1990; worked for ANC Health Department in Lusaka, Zambia between 1989 and 1990. On her return to South Africa Dr Dlamini Zuma serves as Chairperson of the ANC Southern Natal Region Health Committee from 1990 to 1992 and as a member of the Executive Committee for Southern Natal Region of the ANC from 1990 to 1993. She has worked as a Research Scientist at the Medical Research Council in Durban from 1991 to 1994; She has also served as a member of the Steering Committee, National Aids Co-Ordinating Committee of South Africa in 1992; Deputy Chairperson of the United Nations AIDS (UNAIDS) in 1995; Provincial Chairperson for ANC Women's League of Kwa-Zulu Natal from 1997 to 2008; member of the ANC National Working Committee (NWC) from 1998 to 2007; member of the ANC Health and Campaigns Committee; and Chancellor of the ML Sultan Technikon, Durban in 1996. Dr Dlamini Zuma has also served as the President of the United Nations World Conference Against Racism (WCAR); President of the Ministers' Council for the United Nations World Summit on Sustainable Development (WSSD) and led a number of peace initiatives to DRC, Comoros, Lesotho and many others. She is a former Chairperson of the African Union (AU) Executive Council of Ministers, during South Africa's tenures as AU Chairperson. She was part of South African Bid Committee of the 2010 FIFA World Cup and a member of the 2010 FIFA World Cup Local Organising Committe from 2007 to 2010. She served as Commissioner for the Socialist International in 2007 and Pioneered legislation that banned tobacco sports sponsorship and the passage of the legislation on "no smoking policy in public" areas. She is a member of ANC Women's League National Executive Committee; member of the Socialist International Commission on Climate Change and a Co-convenor of the National Progressive Women's Movement of South Africa from 2006. She is also a member of the African National Congress (ANC) National Executive Committee (NEC) and National Working Committee (NWC).

Personal Interests/Awards/Membership:
Dr Dlamini Zuma is a recipient of the Honorary Doctorate of Law from University of Natal in 1995; Honorary Doctorate of Law from University of Bristol in 1996; Doctor of Medicine degree (Honoris Causa) from University of Transkei in 1997; Honorary Degree from MEDUNSA in 1999; Tobacco Free World Award (WHO) on 17 May 1999; Women who make a difference Award from International Women's Forum (IWF) in 2002; Tribute Achievers Awards: Premium Award on NEPAD from Tribute Magazine in 2002; and Grand Maitre de L'orde National (Orde National du Mali) of the Republic of Mali on 07 May 2002. She has also received the Stateswomen of the year Award from BBQ in 2004; the Order of Peter the Great: First Class, Russian Federation in 2005; Honorary Professor of the Belarusian State University in 2007; Huesped Illustre de la Cuidad de la Habana (Illustrious Guest of Havana City) decoration in Cuba and Huesped Illustre de la Cuidad de la Santiago (Illustrious Guest of Santiago) decoration, Chile.