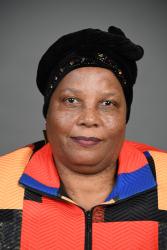 Past:
In 1983-1987 was chair of Hambanathi Development Committee and ANC Women's League and was part of formation of UDF In 199b-1999 was ANC branch secretary of Tongaat, Womens league secretary and elected as REC member of North Durban Region In 2008 was elected as a Regional Executive Committee member until February 2014. In 2009 to date I was deployed in KZN legislature as member of Parliament